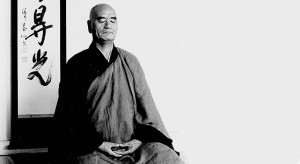 Born in Saga in 1914, Taisen Deshimaru became a disciple of Master Kodo Sawaki in the 1930s. Kodo Sawaki was one of the most influential Zen masters in 20th-century Japan. He particularly emphasized the importance of zazen practice and was among those masters who opened up the practice to laypeople by organizing sesshin in numerous temples.
Unlike most Zen masters, Taisen Deshimaru continued to lead a secular life while following his master’s teaching. He received the monk ordination in 1965, shortly before his master’s death. In 1967, he came to Europe and settled in Paris to transmit the teaching of Zen.

Shortly thereafter, in the 1970s, his mission began to increase in scale. He received dharma transmission from Master Yamada Reirin, head of Eiheiji Temple, and became kaikyosokan (head of Japanese Soto Zen for a particular country or continent) in Europe. He trained many disciples, and was the catalyst for the creation of a multitude of practice centers. He founded the AZI in 1970 and La Gendronnière in 1979. He died in 1982, after having solidly established Zen practice in Europe