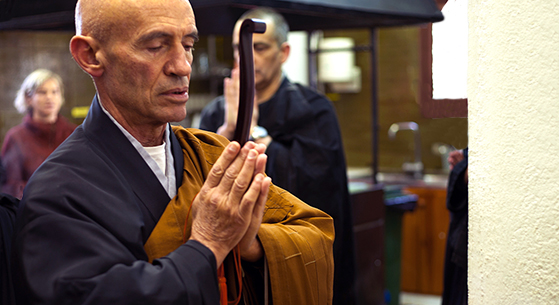 Born in 1944, Roland Rech graduated from the Paris Institute for Political Studies in 1966, then received a post-graduate degree in clinical psychology. After three years spent working in business, he traveled around the world and discovered zazen practice at Antaiji Temple in Kyoto. Moved by this experience, he decided to follow Master Deshimaru’s teaching in Paris. He became his disciple and received the monk ordination from him in 1974.

While returning to his professional work, he helped Master Deshimaru’s mission by becoming one of his translators, seeing to the coordination of the dojos and editing his books. He also began to teach during sesshin.

After Master Deshimaru’s death, he was president of the IZA until 1994. He is currently vice-president. In 1984 he received the transmission of the shiho from Master Niwa Zenji. In 1986 he took part in founding the Buddhist Union of France, of which he is vice-president.

Since 1997 he has been teaching Zen at the Nice Dojo and on sesshin. His teaching is published in books in the Yuno Kusen collection. He has also published A Zen Monk in the West (Albin Michel), Zen: Daily Awakening (Acte Sud), and an interview with E. Blatchen for the program “Names of God,” distributed in France by Desclée de Brouwer, all in french.